Summer isn't over, but it's drawing to a close.  School starts 8/22, in about 3 weeks.  And I've knocked out articles and book chapters and focused my scholarly reading on primary and secondary historical sources for a long time now, related to each of those projects.  Today I send off the last article for awhile (on evolution).  Then there's one more article-in-progress (accepted!) that needs minor edits this fall (on the historical uses of evaluation in public library children's services).  I have a next project in mind (on race and children's publishing in the mid 1940s) that's on the list for spring.

But for this coming fall, I'm planning to read articles on race, racism, and whiteness from a variety of perspectives.  Some will be assigned for my new Youth Services Community Engagement class.  Others will be from K.L.'s stack that she gave me in spring.  Still more will come from the emerging reading/research group on Critical Race Theory/Critical Theory/research perspectives that I'm facilitating into existence in early fall.  But I'd like it to be a bit more focused than Everything.  So, in addition to that focus, here are a few other threads I'm thinking of:

So my goal for fall is to read and blog something, book or article, once a week-ish.

Or at least done for now.  At the SHARP conference in D.C. last week, I presented on a panel I created with two wonderful colleagues, Loretta Gaffney and Debra Mitts Smith (don't miss her book Picturing the Wolf in Children's' Literature from Routledge), about the "struggle for survival" of controversial books in children's literature.  Loretta talked about sex, Debra talked about predators, and I presented on "The Art of Evolution:  Images of Geological Time in Science Books for Children, 1921-1956.  I'll most likely upload the powerpoint to my website soon.
The 1921 date is important because that's when the first Newbery medal was awarded to a rather hulking book (not as long as some of Rowling's, but still) called The Story of Mankind by Hendrick Van Loon.  Here's how he visualized human evolution: 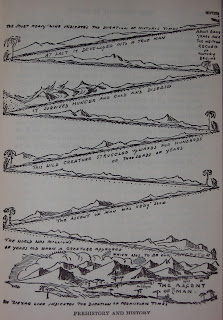 The text reads:
“The ascent of man.  The world was millions of years old when a creature appeared which was to be our ancestor.  The ascent of man was very slow.  This wild creature struggled upwards for hundred of thousands of years.  It survived hunger and cold and disease.  At last it developed into a true man. The zigzag line indicates the duration of prehistoric times. The short heavy line indicates the duration of historic times.”
So that's one example, but not the prettiest one.  My personal favorite is by Alex Novikoff (from Climbing Our Family Tree 1945), whose academic career and anti-eugenics stances are traced in the biography Stalking the Academic Communist by Holmes.  Excerpts of his work also appear in Mickenberg and Nel's Tales for Little Rebels  (a good follow-up to Julia Mickenberg's Learning from the Left which won multiple prizes). 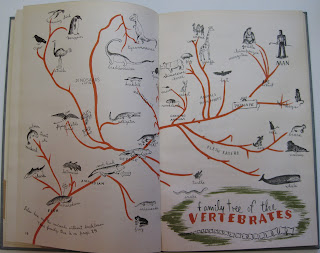 But the most stunning one in terms of color is definitely Bertha Morris Parker's illustration from  Golden Treasury of Natural History from 1952. 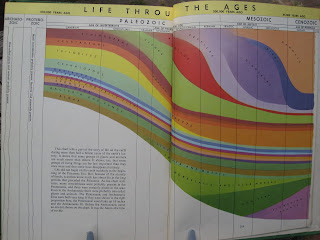 Here you see time on a left-to-right axis and the swaths of color represent predominant kinds of creatures during those times, such that the top right orange area represents "mammals."
My main analytic framework came from a new book (2010) called Cartographies of Time by Daniel Rosenberg and Anthony Grafton, who argue for timelines as more than just the facts of chronology.  Their timeline of timelines attempts to understand their historical development over the last 250 years, arguing specifically that “…traditional chronographic forms performed both rote historical work and heavy conceptual lifting.” (p. 11)  I argued that these ways of visualizing evolution did the "heavy lifting" of both showing ways of visualizing geological time that were accessible to child readers and of indicating cultural beliefs about how humans are different from animals, an especially touchy topic when it comes to evolution.  In the Novikoff, above, a zoom-in might show you that the man at the top right ("top" being a visual metaphor that signals "higher development" in many of these illustrations) is holding a gardening hoe, evincing the long-held belief that humans differed from animals in their tool use (which is now known to be not as extreme a difference as previously thought).
I got a great deal of useful background and range of scholarly approaches from the book Victorian Science in Context by Bernard Lightman (an organizer of the SHARP conference which I just attended and a really nice person), which now goes back to the library.  As do a suitcase full of great primary source texts.  I say goodbye to them to make space for class prep, writing the other promised article on evolution (with Caroline Nappo, in which we examined 244 books for their evolution content over the course of a year), and focusing on the upcoming article for Children and Libraries about the historical roots of evaluation in youth services librarianship.
Posted on 7/22/2011 09:35:00 AM

Three Rapunzels.  To be read and discussed during one day of the Fantasy class.  Three interpretations of a tale that has changed in both oral and print form.

The most classic of these, from the story to the art, is Rapunzel by Paul O. Zelinsky.  Zelinsky won the Caldecott medal for this Renaissance-painting-inspired version.  He could easily have won another award for his excellent source note in the back, which details a lineage of written versions of the story as well as oral tradition inspirations.  The various mini-versions of the story make for intriguing reading, but this book is really about the glowing illustrations.  The tale is the most traditional of the three:  Rapunzel is raised by a sorceress (taken from her mother who ate the rapunzel in the sorceress' garden), locked in a tower, meets her prince but their passion is thwarted by the sorceress, who blinds him and leaves him to wander in the woods.  Meanwhile, she bears twins, also alone.  When they meet again, her tears heal his eyes, and they are finally a family.

Straightforward enough.  But Zel by Donna Jo Napoli offers an eerie psychological take on the story, using alternating perspectives to see things from Rapunzel's (Zel's) point of view, her "mother's" point of view, and also Count Konrad, who sees Zel at market one day.  This novel-length retelling has room to elaborate on Zel's character and her near insanity when imprisoned in the tower.  The witch's motivation is clearer as well; she has sold her soul for the powerful growing magic that allows her to manipulate and control nature in many ways, including growing Zel's hair to such unnatural lengths.  She bemoans her barrenness, staying angry at all women who bear children, even her own Zel when she becomes pregnant by Konrad.  Konrad meets Zel once and becomes obsessed, pursuing her for years.  None of this make logical sense, as folktales often don't, but Napoli coaxes a kind of psychological sense that changes the way you see the story.  The witch is both evil and pitiable.  Konrad and Zel share an inexplicable bond after the one meeting, one that is more plausible from Zel's socially deprived perspective than from Konrad's, but it basically works.  Told this way, it's a drawn-out love story.  The way that Zel came to live with Mother is only explained later, when Mother admits to Zel what she did and hopes that Zel too will choose to sell her soul to the devil so that they can stay together forever.  Electra complex fans would have a field day here...  but the story of a mother who will do almost anything to keep her daughter from growing up and coming to power, especially sexual power, remains bewitchingly compelling.

Finally, Shannon and Dean Hale collaborated with artist Nathan Hale (no relation) to create Rapunzel's Revenge, a graphic novel set in a fairy tale wild west.  Rapunzel here is not stuck in any tower, though she does have unusually long red hair and uses it to whip or lasso her enemies.  This is pretty far flung from the original... the main motivation that Rapunzel has is to rescue her real mother, whom she meets the one day she escapes from the witch's villa.  It's silly and goofy and fun, especially when her thieving sidekick Jack turns out to be a romantic interest as well as the guy with the magic beans.

It's going to be a great set to compare and contrast:  picturebook, novel, and graphic novel.  Three very different retellings of an old story.  I'll need to watch the Disney movie Tangled before class starts, and I might also throw in an article by Marina Warner on her own Rapunzel retelling.  Should be fun!
Posted on 7/02/2011 02:37:00 PM

City of Fire by Laurence Yep is a multi-mythological adventure that reminds me a little of Avatar:  The Last Airbender in its cast of improbable heroes and East-meets-West philosophy.  From Chinese dragons to the Hawaiian goddess Pele and even over to the Norse fire giants, Yep has clearly done a ton of research.  But none of that would matter if there weren't a good story here, and there is.  The story is told in alternating perspectives, but it's hard not to see it mostly from the young girl Scirye's point of view.  When her mother and sister are guarding precious Kushan relics as the Pippal warriors they are, the San Ffancisco museum is attacked by a dragon who steals and ancient ring and leaves behind devastation, including the death of Scirye's warrior sister.  This brings some unlikely allies together:  the royally raised Scirye, the street kid Leech and his friend Koko, and the old woman Bayang, who is really a dragon in disguise.  They band together slowly, as Bayang was initially hunting Leech for reasons that are revealed later in the book.  But as prey becomes ally, they are each revealed to have some magical heritage and mysterious powers.

While Yep pulls all the threads together, the opening is a bit chaotic, and the perspective-based chapters occasionally wander a bit in perspective.  So it does take some persistence to get past the first few chapters.  The attack is dramatic, but the ensuing chapters bog down a bit before the adventure actually begins (about 87 pages in).  And the dialogue is a bit slapstick at times, which keeps the characters fairly shallow (Koko is the jokey guy, Leech is a serious hero, Bayang is rethinking her dragon alliances... only Scirye is developed enough as a character to really follow emotionally).  But that's not unlike what Lloyd Alexander did quite successfully in the Book of Three series, so it really depends on your taste.  So.  I'm recommending this one, and saying:  just suspend your disbelief and trust Yep.  He's good at what he does, he knows what he's doing, and whether the mythologies and cultures he weaves together are familiar old friends to you or inspiration for exploration (only a mythology scholar would know all the references, but they're contextually defined), it's a good yarn.  Fans of Rick Riordan's Percy Jackson and the Olympians series will want to know about this book as well, though it will appeal less to the reluctant readers and more to those who are as interested in psychological motivation and snappy comebacks as they are in action.
Posted on 7/02/2011 08:28:00 AM