In Cinderella Ate my Daughter, Peggy Orenstein explores a wide range of questions related to contemporary girlhood, from the marketing of the Disney Princess product line to the how biological differences between male and female brains are used to justify it.   Orenstein has done her homework, but the book is a personal exploration of her motherhood choices rather than a scholarly work.  I don't have a daughter, but the thought-provoking questions that Orenstein raises about the world of gender and the marketing of all things pink to girls are certainly important.  What stays with me most is her analysis of the Disney actress trajectory, from self-declared virgin to marketable sex symbol.  As she writes:  "...self-respect has become a marketing gimmick, a way for female pop stars to bide their time before serving up their sexuality as a product for public consumption." (p. 124)  It may be true that, just like we overestimate young people's technical abilities on a regular basis, we also overestimate their abilities to resist pervasive marketing.

A few choice quotes and moments:

"Toy choice turns out to be one of the largest differences between the sexes over the entire life span, bigger than anything except the preference (among most of us) for the other sex as romantic partners.  [...] That blinds us to the larger truth of how deeply those inborn biases are reinforced by a child's environment." (p. 63-64)

"The changes kids go through are so quick, so intense, and you are so bloody exhausted when they're happening.  It feels as though you'll never forget, but you always do." (p. 95)
(Hence the importance of aunts, uncles, and friends who can help parents remember the stories and experiences.)

Orenstein notes that Daniel Cook established that the word "toddler" is not a psychological phase but instead a marketing term invented in the 1930s. (p. 36)
She also describes the relative lack of female muppets as the "fur ceiling" (p. 40), a phrase that just cracks me up.
She mentions "the inflexible stage" that four-year-olds tend to go through (p. 61).

The Cute and the Cool by Gary Cross is another sweeping childhood studies history of all things child-related, with special focus on products and marketing, but this book is taking a solidly scholarly approach.  He explores the marketing of child images, to adults and children, and explores the ways that what started as "cute" or nostalgia for all child-related things transforms into "cool" in movies like Gremlins.

When the feminist revolution of the 1960s and 1970s removed that burden [of being an image of purity] from women, it was shifted to the child. (p. 6)

While we long to protect the young, sometimes we also fear them when they do not fit our image of innocence. (p. 9)

We see childhood as timeless, yet we shower the young with fads and innovation. (p. 13)

[During the 20th century...]  The child's 'secret garden' of innocence was increasingly filled with the images and values of an emerging consumer culture. (p. 15)

What had been the cute, ultimately controlled by parents, became the cool--the opposite of the cuddly and delightful. (p. 17)  [Cross says this started among boys in the 1930s with "dark science fiction stories"]

Interesting for Sarah Park...  Traditional adoption was of older children, who could work.
"A major change occurred when adoptive parents began to seek newborns.  The demand for infants rose from 19 to 21 percent of adoptions during the 1930s and 48 percent in 1950, 68 percent in 1960, and 98 precent by the end of the 1970s.  Increasingly couples wanted a baby who was 'cute and cuddly,' not an older child who might have been emotionally damaged by an orphanage or foster home." [...]  "This shift reveals the influence of psychological expertise but also the changing purpose of children in adult lives." (p. 30)

Pages 40-42 deal with child care instruction guides for parents, admonishing them not to "cuddle" and "indulge" too much.

"The original meaning of the 'cute' person was interchangeable with 'cunning,' a corruption of 'can,' meaning clever and crafty." (p. 43)

"Wondrous innocence and consumerism shared a common appeal--saying yes to desire. [...]  Is it any surprise that wonder so often prevailed over protection, delight over development?" (p. 81)

"In effect, adults like Disney invented the role of the wondrous child and expected real children to play it in the nostalgic setting of Main Street." (p. 115)


Other things to explore:
Paula Fass, The Damned and the Beautiful; American Youth in the 1920s

Back in spring, I read some chapters from...
The International Handbook of Children's Media and Culture, Eds. Drotner and Livingstone.  Sage, 2008.

"Harlequin Meets the SIMS:  A History of Interactive Narrative Media for Children and Youth from Earily Flap Books to Contemporary Multimedia" by Jacqueline Reid-Walsh (71-86)

"Children and Media:  A Cultural Studies Approach" by David Buckingham

The whole text is a combination of media theory and media effects research, with a special focus on non-US settings in later chapters.

Some quotes and ideas:

"...adults are wholly dependent upon children to secure the continuation of life..." (p. 9)

Geertz's definition of "culture"
"...system of inherited conceptions expressed in symbolic forms by means of which people communicate, perpetuate, and develop their knowledge about and attitudes toward life."

Other things to look up:


Journal of Children and Media

"Hamlet on the Holodeck" by Murray (1997)--differentiates between agency (move a chess piece, many possible options) and activity (spin a die, prescribed).

Media studies situates children as vulnerable or competent, which emphasis on investigation into effects.
This contrasts strongly with the artistic and aesthetic tradition in children's literature (p. 10)

Kristin Cashore has captured intelligent female fantasy readers with her books Graceling, Fire, and now Bitterblue, where we pick up with the beleaguered daughter of Ashen as she is growing into being queen.  I hesitate to assert these themes, but if Graceling is about learning about loving connection despite fear and Fire is about discerning the different flavors of love and admiration that "monstrous" attraction can evoke, then Bitterblue is about learning to compassionately encompass a kingdom.  In other words, Bitterblue is about power.

And those who are captivated by court drama will enjoy this immensely, although the romantic flair that characterized Graceling and Fire is significantly toned-down here.  Bitterblue is struggling to reclaim her kingdom--and even to understand it--since the 35-year reign of her father King Leck.  Leck's grace was the ability to fog others' minds, take them over, and force them to do his bidding without their understanding that it was, in fact, his bidding.  The scars of his sadistic acts linger, both in the people and animals subject to his abuse as well as in those who were forced to do his bidding.  It takes many pages of complications before Bitterblue understands that her current advisors, who were her father's men, are not only complicit in a series of complex cover-ups--from literacy to finances--but are doing so in great part because of how Leck twisted them.  All four men were promising young healers, and all were forced to become torturers.

As Bitterblue finds her way, there's this glorious passage of what I think of as her vision of an encompassing compassion, which will allow her to become the just ruler she strives to be.  The passage starts with her "raw and crying with grief":


Then something began to change in the room.  None of the feelings changed, but Bitterblue encompassed them somehow.  She was larger than the feelings, she held the feelings in an embrace, and murmured kindnesses to them and comforted them.  She was the room. The room was alive, the gold of the walls glowed with life, the scarlet and gold starts of the ceiling were real.  She was bitgger than the room; she was the corridor and the sitting room and Helda's rooms.  Helda was there, tired and worried and feelings some arthritis in her knitting hands, and Bitterblue embraced her., Bitterblue comforted her too, and eased the pain in her hands.  And grew.  She was the outer corridors [...]. She was the offices and the tower and she embraced all the men who were broken and frightened and alone. [...]  And to embrace her friends among them, feel the complications of their feelings for each other [...].

Recovery from 35 years of trauma will not come easily to the kingdom.  As Bitterblue says:  "My kingdom's challenge is to balance knowing with healing." (p. 537) Which is the way with any recovery from horror.

I did have a few critiques of the book.  The relationship with Saf is much flatter than Cashore's other romantic forays in previous books, and perhaps that is indicative of the focus here on coming into power as a leader rather than coming to know oneself.  Still, Saf can be downright annoying, and there's something odd about the ways that Bitterblue can see the flaws in her own kingdom increasingly clearly while remaining enamored of "bad boy" Saf, whose friends are a real boon but whose own contributions to her coming into power are neutral or mildly detracting.  I suppose you could argue that Saf is there to show Bitterblue's rounded strength, the strength not to fall in love with a scalawag and a thief while, nonetheless, making love to him.  And, let's face it, if he really does resemble Prince Po, then that is strength indeed.

Overall, this is another outstanding book, and fans of the first two will deeply appreciate all the strands that come together from those narratives here (though I wouldn't recommend reading it separately).  By the end, we see Katsa and Fire in the same room with Bitterblue, who is poised to rule a kingdom in a new world of peaceful neighbors recently revealed.  A powerful trio of women indeed.


One other great quote:
"Every configuration of people is an entirely new universe unto itself." (p. 375)

I am celebrating this:

I am also celebrating that my cat is okay, that my spouse is a rockstar, that my friends are awesome, that I have new glasses and comfy, sassy shoes.  Life is short and full of injuries of all kinds.  Some days, we just sweat it out.  My wish is that everybody, at some point, gets to work hard and be rewarded for it.

I'm also in the middle of Bitterblue by Cashore.  More to come! 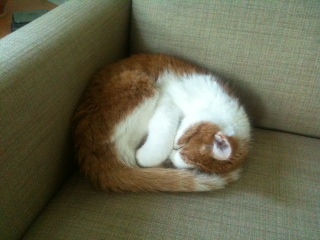