Plot and the correlation-causality continuum


When I talk to people about plot or read books about how to write a great plot, for instance for a movie (1), folks generally assume that plot indicates causality. Events occur in an order, one causing another, as a straight line of dominoes each causing the next to topple. That bad old wolf wouldn't have eaten Grandma if Little Red Riding Hood hadn't strayed from the path, like her mother said, right?

But I don't think causality alone is what fascinates most of us about a good story.

I argue that plot operates on a continuum between correlation and causation. This is a continuum that includes both ends. What I mean is that stories actually don't make clear and explicit arguments about causality all of the time. They do sometimes, when they are operating at the extreme causation end of the spectrum, but many times events occur in sequence without an argument about causation. Our minds are drawn to stories because the sequence of events in a typical plot is open to interpretation. A key reason that we turn a story over and over again in our minds is because we are sifting through what caused what and what merely correlated. As one example, when we watch a noble protagonist struggle to survive, our minds are trying to understand whether their fear is mere superstition or warranted by the circumstances, or to what extent they may be to blame.

Sometimes in stories, magic intervenes. For instance, we might agree that what causes the wolf to eat Grandma is his hunger, and even infer that he hasn't eaten for awhile. We might infer that he goes to grandma's because that way the clever wolf will get a two-for-one meal deal. But what causes him to put on the grandmother's clothes? The wolf in granny's clothing is not about causation per se, but instead about speculation around what might be possible. In the moment of greatest safety, a little girl coming home to grandma's house, there might be unthinkable danger. Granny made the mistake of opening the door and letting the wolf in, and now danger is waiting for Little Red, though she doesn't know it right away.

In many stories, there is the moment when we are lost, disoriented, faced with unknowable circumstances. The process of coming to understand what is true about an unexpected situation can be instantaneous, or it may take awhile. "Oh granny, what big eyes you have" Red says. "All the better to see you with," come the reply, with no explanation. Slowly, Red notices the big teeth. In life as in stories, we may feel hunted by the wolf when we are only lost in the woods, or that may be the ending knocking on our door. 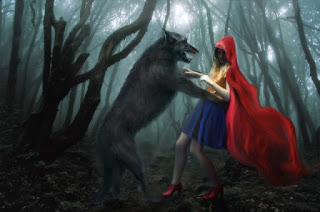 Stories tell us what happened, and in the space of what happened there is ample room for our minds to infer a range of interpretations. Causality is central to our understanding of narrative, and yet narrative is not simply a causal chain of events.  Our minds infer meaning from both the logical and the symbolic elements of stories, and these help us to infer whether two moments in a story are part of a causal chain or just part of the correlated things that happened. Or somewhere in between.

I'll get back to Little Red Riding Hood, but it's worth pausing to think about factual story examples as well. When scientists observe a phenomenon in the world, they speculate about possible causes. Before they assert or test a hypothesis, and long before they develop a theory, they imagine plausible explanations. Sometimes they publish them in cases of urgent environmental or social need. For example, scientists observed a massive dying off of bees. They speculated about causes, renamed the phenomenon colony collapse disorder, and indicated their best hypothesis about the cause: combinations of agricultural pesticides and fungicides. But in that literature, as in all rigorous academic literature, you'll find that this isn't the end of the story, because there are other possible causes and it's not just one class of pesticide that's implicated. Even with probable causality, there remains some uncertainty (and some angry folks in the agricultural industry). Scientists even have some pretty funny jokes about their own struggles to determine causal linkages.

Most of the time, stories that really capture our imaginations don’t make explicit claims or arguments about causation.  They operate on that inclusive continuum between correlation and causation. Correlation is stronger than mere sequence, because our minds automatically create meaning from the juxtaposition of two events in a story structure (the Kuleshov effect). Still, correlation is not as strong as causation; we admit that we don't know why things happened, they just happened that way, we are telling a story involving correlation.

The act of traveling back and forth along this continuum fascinates us about a story. The complexity inherent in determining whether two events correlate or relate causally to one another keeps us coming back to stories. Sometimes it keeps us coming back to the same stories, over and over again. It is one of the key reasons why we enjoy re-watching and re-reading; we understand the meaning differently this time not because the story has changed but because we have moved into a new way of inferring meaning from the complex constellation of correlation and causation that is a single story.

Now let's go back to the example of Little Red Riding Hood (LRRH) in greater detail.  At its climax, the chain of events is perhaps at its simplest.

Even though there's a pretty clear causal chain here, note that nothing in particular causes the Woodsman to be nearby. His hearing screams causes the killing; the killing constitutes the rescuing. This is perhaps more defined causally because it is very significant, the ending  of the story (I'll write a later blog post about story endings). However, there are many other sequential events that are less final, less certain, more open to interpretation.  Let's go back to the beginning.

1. Red's mother tells her to stay on the path and go straight to Granny's.
2. Red leaves the path to pick some flowers.
3. Along comes the wolf.

We would not generally say that Red picking flowers caused the wolf to arrive.  Leaving the path, although it is forbidden earlier in the story by Red’s mother, may be an unsafe thing to do, but neither does it cause the wolf to arrive.  The wolf simply arrives. That's what wolves do; they arrive, they prey upon the innocent, they are opportunistic villains in such stories. (2) This introduces the central problem of the story, it is the challenge that Red must face.  In no way would we say that the wolf is not important to the story, but his arrival is not strictly linked in a set of causal events. So many stories are like this: a stranger comes to town or a journey begins. This story, in some sense, begins in both of those ways.

Stories tell us what happened, and they leave room for us to infer what it means, including much of what caused what within the story. This is why storytelling is not always didactic and is often open to interpretation by the audience, whether the teller likes it or not, and why storytelling is limited as a means of marketing (but more on that in another later post). Where a story presents a sequence of events, one person sees a causal chain of relationships and another person sees a set of events that just happen to occur together.

Many of the stories I read and think about are folktales, those stories that have been heard and honed by generations of people. They operate as a kind of cultural history, and they tell us what survived. As Betsy Hearne has argued, sometimes they tell us how to survive. And they certainly tell us what has captured the imaginations of generations of human beings, long enough and strong enough that they come all the way down to us from hundreds of years ago. I'll add to all of that wisdom that they tell us which stories people have revisited, over and over again, to continue to play with what the story means. Causation and correlation are two interrelated ways that our minds dwell on and in the world of a wonderful story.

(1) McKee, Story; Yorke, Into the Woods; and many more.
(2) Smith, Picturing the Wolf in Children's Literature; Niemi and Ellis, Inviting the Wolf In: Thinking about Difficult Stories.